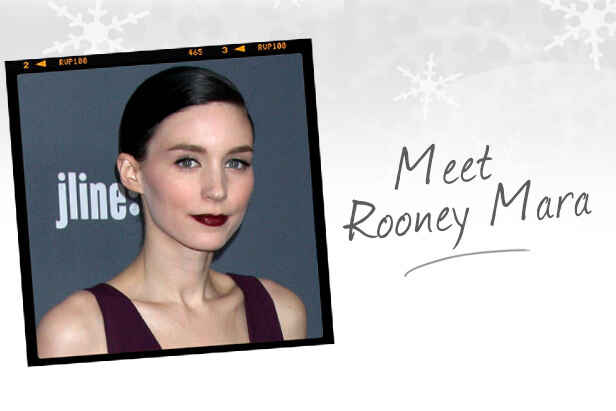 If I’d have mentioned the name ‘Rooney Mara’ to you a few years ago, chances are you probably wouldn’t have a clue who I was talking about. Up until then, the only world wide known Rooney is that of the English Premier League footballer, Wayne Rooney.

Well, not only is Rooney Mara not a footballer; she’s a hugely talented actress who has starred in block buster films such as The Social Network and The Girl with the Dragon Tattoo. Starring alongside major movie hunks such as Channing Tatum and Daniel Craig, Rooney Mara has flourished as a head turning actress and red carpet beauty.

Born in New York in 1985, Rooney, who was christened Patricia Rooney Mara, made her stage debut at a very young age. Although growing up she had focused her studies on topics such as travelling and international social policy, Rooney Mara discovered her love of acting after she got involved with student films while studying at New York University.

Her first major film role was part of the cult horror classic remake, A Nightmare On Elm Street, which was re-shot and released in 2010. Although she starred in this film and other big screen movies, such as The Social Network, her crowning acting moment was playing the lead of Lisabeth Salander in The Girl with the Dragon Tattoo. This is when the mysterious Mara really began to catch the public’s eye.

Portraying the elusive and dangerous character of Lisabeth, who came alive in The Girl with the Dragon Tattoo books, Rooney Mara had a lot of pressure on her shoulders to deliver the character that avid readers had dreamt of. She was highly acclaimed for her performance in the film and struck a chord with viewers, who started to see her in a whole new light.

It wasn’t long before Mara’s acting achievements began to move her up the stardom ladder, allowing her to become the face of Calvin Klein’s latest fragrance, Downtown (scroll to the bottom to take a peek at their stylish advert for this fruity scent). Featuring a soundtrack from the Yeah Yeah Yeahs, Rooney helps tell the story of the urban girl who treats the big city as her playground. Glamorous and quintessentially stylish, Rooney Mara fits perfectly into this advert, turning it into somewhat of her own small feature film. Rooney spoke of the advert, saying ‘It’s an honour to be part of a brand with such a legacy of breakthrough advertising. The Downtown fragrance holds true to the chic, confident and simple feeling of the Calvin Klein brand.’ The Senior Vice President of Coty Prestige, Catherine Walsh, spoke of the Calvin Klein Downtown advert, saying ‘We were thrilled to work with Rooney Mara for this campaign; her individuality and formidable talent resonate with the incredible legacy of women who have been captured in Calvin Klein advertising over the years.’

Calvin Klein Downtown is an effortlessly sweet fragrance which is ideal for the younger generation. This addictive scent contains notes of green pear, watery plum and pink peppercorn; making it a stylish and vibrant fragrance for every day wear.

It isn’t hard to see why Calvin Klein wanted Mara as the face of their hottest new fragrance. During her regular red carpet appearances, Rooney Mara has managed to create that ‘wow’ factor that hundreds of fans adore. Her style has evolved into one of sophistication and elegance, with beautiful dresses that compliment her fair complexion. The 28-year-old actress often keeps her make-up look quite simple, with either a cat eye eyeliner flick or a deep lip colour, which always looks striking and bang on trend. Here at Fragrance Direct, our favourite Rooney Mara make-up look is her deep berry lip which she wore at a recent red carpet event. If you want to recreate this key A/W look for yourself, take a look at our YouTube tutorial video to learn how!

Rooney Mara is set to continue taking the celebrity world by storm with her upcoming film releases, including the next chapter of the Girl with the Dragon Tattoo series, entitled The Girl Who Played with Fire. Frankly, we can’t wait to see what the future has in store for Rooney Mara and what beauty looks and fashion trends we can hope to see from her.

Are you a fan of Rooney Mara? What do you think of the Calvin Klein Downtown advert? Let us know by leaving a comment below!