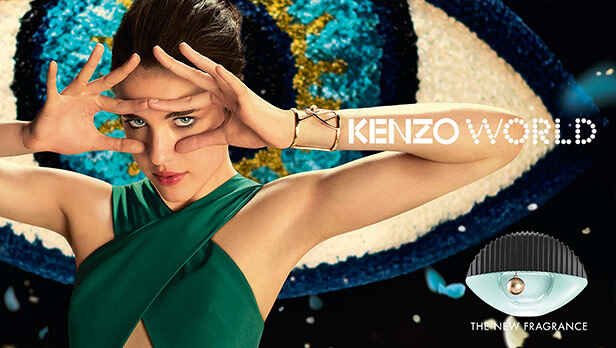 KENZO WORLD the newest and most exciting launch from the brand! KENZO’s artistic directors Carol Lim and Humberto Leon breathe their vision of fashion into their first fragrance’

A world in their image: bold, spontaneous, surprising, fun and colourful’ A world that celebrates freedom of expression, diversity and creativity. A playful and dynamic fragrance’ true to the KENZO spirit.

For the 2013 fall-winter collection, Carol Lim and Humberto Leon made the eye the iconic motif of the KENZO world: ‘The all-seeing eye is a major imprint of the collection and alludes to the force of the third eye and to spiritual protection from above’ they explain. ‘We loved this interpretation of the eye really informing your world and being able to personalise your world.’ Carol Lim.

As one of the most recognisable fashion icons of the KENZO collection, the eye now transcends into the universe of fragrance. The striking bottle features black rubber, pink gold and opaline, recalling the mix-and-match of KENZO fashion. Mysterious and fascinating when see from the front or above, the eye reveals itself from every angle. A stylized metaphor of the eye and its power, the box invites you to experience its magic. Embossed on the paper, concentric circles gravitate around the eye, in an optical mise en abyme of its captivating seduction. A world of endless exploration.

KENZO WORLD’S FLORAL BURST
The KENZO WORLD flight opens with a surge of flowers by the armful, from petals to bouquets, with bursts of sweetness’ it’s a brilliant fragrance, with a lively sparkling trail, a crazy rock nectar with an intoxicating scent that titillates the nose. A shot of energy that benefits the soul. A stylish lingering aura. Francis Kurkdjian created this fragrance like a real flower explosion, where each flower reveals a new facet. Like a dreamlike bouquet, the Peony is a sublimated to accompany the ‘red berry’ facets of Egyptian Jasmine. Bewitching Ambroxan sustains the note and add voluptuousness an sensuality to a fragrance that transgresses stereotyped femininity.

‘My Mutant Brain’ by Spike Jonze
‘For us, the KENZO woman is relatable. She’s inspirational yet understandable. She’s doing things, right? She’s got things happening in her life. She’s going to school or she’s dating. She’s an activist. She’s a doer. What we wanted to convey was that yes, she possesses this extra layer. We also want her to be someone you attain to be, like the best version of yourself.’ Carol Lim.

Jonze has certainly transcended the genre, creating a madcap musical stomp that blends choreography and performance. Without pausing, he drops us into the midst of frantic life, invites us to run as far as the eye can see, with renewed energy, never of out breath, to pursue our dreams and desires.
Casting required a girl who could not only dance (mechanically and masterfully) but embody the irreverent chic and quirkiness of KENZO, not to mention the spirits of whatever was possessing her or whatever personality she was exhibiting. Upon meeting Margaret Qualley, an actress and former dancer, it was obvious they had found the perfect sylph for such a demanding role. Margaret Qualley exudes elegance while moving to a diabolical tempo in a flamboyant green dress created by Carol Lim and Humberto Leon. She aims for the moon and dives headfirst into her dreams. With a cavalcade of back flips through a series of corridors, she gives a bold performance that captivates with each move, exuding raw, provocative energy. In her wake, she pulls everything that moves along with her; she sees the world the way she wants to see it. On a par with her excessiveness. Her run finishes with a breath Â¶Âªtaking swan dive that tells conventionalism where to get off.

‘The KENZO girl inhabits the present, like right now. She’s not nostalgic at all. She likes movement and speed and the way things shift and slide and collide in real time. She’s never blasÃ‡Â¸, always enthusiastic. She stands out from the crowd.’ Carol Lim and Humberto Leon