Kenzo Flower In The Air 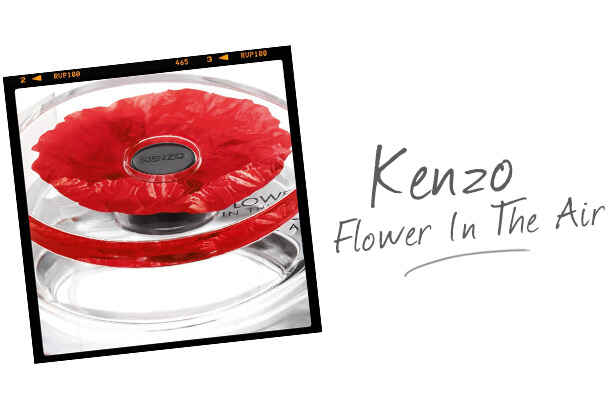 Kenzo Flower In The Air was released in August 2013 as the newest fragrance from the Kenzo line. Unique and eye-catching, Flower In The Air houses every quality that represents the edgy and distinctive Kenzo brand.

This daring scent is represented by an iconic red flower which is shown throughout the Kenzo Flower In The Air packaging. To be more specific, it’s a beautiful red poppy, which is the first thing you see when you clap your eyes on the bottle. Flower In The Air was designed as an update to the popular and original ‘Flower’ fragrance which was first released in 2000. So, let’s get on to why this fragrance is so unique. Kenzo is a French fashion-house brand which was set up in 1970 by Kenzo Takada. Starting off as a fashion designer from a very early age, Kenzo studied at Tokyo’s Bunka Fashion College. Despite his parents’ dispute about his career path, Kenzo found became one of the first male students to be admitted to the college. After opening his own boutique and winning various awards for his fashion designs, Kenzo began his perfume line in 1988 which currently houses Kenzo de Kenzo Parfum, Le Monde Est Beau, Kenzo Pour Homme, Flower by Kenzo and now Kenzo, Flower In The Air (that’s a lot of Kenzos to take in!).

Possibly inspired by Kenzo’s own ambition of independence, Flower In The Air is a dream of freedom for the poppy flower which rises into the air with an exquisite scent. Simple but effective, the Kenzo Flower In The Air bottle is decorative, striking and would look fitting on any dressing table. The almost 3D design on the lid which runs throughout, paired with the somewhat plain bottle, the poppy is striking and fashionable; unlike any fragrance design you’ve seen before. The Kenzo Flower In The Air Bottle makes a beautiful present, especially in the lead up to Christmas (Yes, I’ve mentioned the C word!).

As you may have guessed (maybe by the poppy), Flower In The Air is a light and floral fragrance which includes top notes of fresh accords, raspberry and pink pepper. These are met with heart notes of dazzling rose, magnolia and gardenia, making Flower In The Air, an overall sweet and memorable scent. It lingers on the skin and is warm and inviting; an ideal smell for this cold time of year. It offers an interjection of freshness to your chilly winter mornings. Kenzo Flower In The Air is available in 30ml, 50ml and a 100ml bottle which you can find