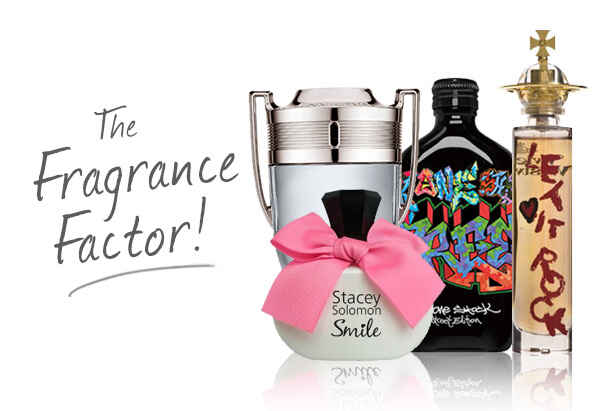 Love it or hate it, The X Factor made a triumphant return to our Saturday night television screens over the weekend and even if we’re pretending not to watch it, we know it’s there. You may only be in it to see the initial few clichÃ‡Â¸ performances, also known as Michael Jackson tributes and far from pitch perfect Tina Turner renditions. But amongst all the screeches, mediocre and outstanding performances, there’s got to be a winner. Whether you spot them early or only pinpoint them in the final stages, they’re there.

So with that in mind, we thought we’d do our own little take on The X Factor and so, we’re introducing.. The Fragrance Factor! (queue Peter Dickson and his booming tones which are known to millions).

The Fragrance Factor is tough, it’s ruthless and above all, it’s competitive. Just because you have a pretty bottle won’t mean you’re guaranteed a place in the next round and having top notes of vanilla and lemon may not necessarily categorise you into the favourites pile. As always, the final decisions are left up to the judges and you, the public. And so, we’ve selected some fragrances which have made it into the first round of The Fragrance Factor, but which ones will proceed to the boot camp stages of the competition? You decide!

This is the fragrance you can’t help but love. The cheeky favourite whose ‘smile’ (ahem, smell) captures your heart and you can’t help but fall at their feet. Whatever they sing, whatever they wear, they are the clear favourites, so that even if they miss out on being crowned the winner, they’ll be forever popular. And the ‘Olly Murs’ title goes to Paco Rabanne Invictus; a fresh and invigorating scent that pushes men to work hard and succeed. Well, Olly has already done this in the form of three number one singles and over 10 million records sold worldwide. When wearing Invictus, you’ll strive for success in any challenge you face!

We couldn’t think of a better fragrance to represent Jedward than Sean John Unforgiveable. We still remember The X Factor series when Jedward jumped onto our TV screens and we had the distinct feeling then that we wouldn’t be seeing the last of them. Fast forward three years and this ‘popstar’ duo have performed for the likes of Barack Obama and also have a top 20 album. Although they’ve slipped off the radar (for now), there’s no doubt that they gave one of the most hair-raising, quiff talked about performances of the whole X Factor series.

If you didn’t know already, JLS have a fragrance! So we thought, what better way to sum them up than with JLS Kiss Eau de Toilette Spray. Sadly, the four piece boy band has announced that they are going to split sometime in the next year, but we still have a lot of JLS love to give! Despite their inevitable end, they’ve had a hugely successful career which has seen their music go from strength to strength. With top ten singles including ‘Beat Again’ and ‘Everybody In Love’, millions of hearts will be breaking around the globe when these golden boys separate. Kiss is their first and only fragrance which includes four unique top notes; each one selected by one of the band members. With a fruity floral scent and a stylish bottle, JLS Kiss is the perfect memorabilia to collect before they’re gone for good (tears, please).

This is the diva of the competition, the one to watch out for. Mischa B caused quite the stir during her time on The X Factor, often described as somewhat of a diva. She had the biggest and most risquÃ‡Â¸ outfits commanded attention from the room and was a little bit intimidating, if we’re being honest! Nevertheless, she has an amazing voice and she’s hard to forget, so on that note, we think Vivienne Westwood Let It Rock screams Mischa B, right down to the graffiti style print of the bottle. It’s loud, it’s brassy and it’s memorable. Despite her somewhat unpopular status, Mischa B managed to hang on in there for quite a while, but can we say the same for her in The Fragrance Factor?

He was The X Factor wild child with the unmanageable and untamed hairstyle that drove the ladies crazy. He was late for rehearsals and got into a few tiffs with the judges, but Frankie Cocozza was the contestant who kept us tuning in every weekend, just to see what his next antics would be! We think CK One Shock Street Edition for him is the ideal fragrance to sum up this X Factor bad boy. It’s loud and eye catching design reminds us of the controversial outfits that Frankie wore during his time on the show. This fragrance is a burst of cucumber and citrus which is then blended with chocolate tonka and creamy toffee. This unlikely combination, although odd, works! Much like Frankie Cocozza’s big hair and skinny jeans.

This English rose, turned singer, turned television presenter, turned reality TV star, burst onto The X Factor scene during the sixth series of the competition. Her infectious laugh and heart warming personality secured her third place in the final and her success has resulted in various deals, not to mention her fragrance. Which leads us onto our next point! The perfume which will no doubt represent her in The Fragrance Factor is her very own scent, entitled ‘Smile‘. The packaging suits the London born lass right down to the pretty pink bow on the packaging and we couldn’t think of a better fragrance title than ‘Smile’ to sum up how likeable and carefree she is. Smile is a blend of mandarin, lemon and vanilla orchid. It has a lovely, fresh scent which instantly lifts the mood, much like Stacey’s personality!

They were the first group to ever be crowned the winners throughout the history of The X Factor UK (even beating One Direction to the title!). They have gone on to have huge success and have even broken America in their plan for world domination. Their unique looks and quirky outfits have made them stand out from the crowd and so, we thought the Ralph Lauren Big Pony Collection was perfect for summing up this feisty foursome. Each bottle has a different design and different scent to reflect the many faces of a woman’s personality. Each fragrance is playful and different in its own way, quite like The Little Mix ladies.

Which fragrances would you pick to make it through to the next round? Will you be watching this season’s X Factor? Let us know!